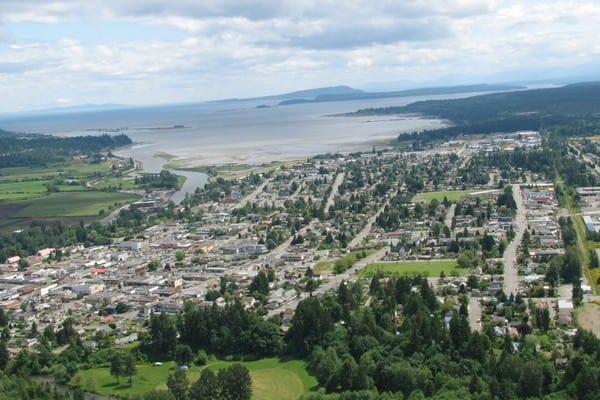 Courtenay, British ColumbiaCourtenay is a vibrant and growing city of 25,599 people nestled against the Western backdrop of the iconic and ancient Comox Glacier.

This commercial and residential centre spans the Courtenay River and offers many urban amenities but without the stress, congestion and rushed feeling associated with a larger city like Vancouver. Tempt your palate at about 80 local eating and drinking establishments. Enjoy a diversity of entertainment venues at local bars and pubs, live performances at the Sid Williams Theatre, and the annual Vancouver Island Music Festival. Shop at the big box stores, many different shopping plazas and several malls or head out and enjoy a myriad of outdoor activities that range from farmers markets to wine tasting as well as a diverse number of recreational, social, and sporting events.

This century old city is currently the fourth largest city on Vancouver Island. Courtenay is located in the geographic centre of the Comox Valley. Its residents are able to enjoy the natural beauty of the area on a daily basis. Many of the homes for sale offer spectacular, captivating, and calming views of the Comox Glacier. This natural wonder is known to the K’omoks First Nation people as Queneesh, the White Whale. This name was applied to the glacier when it appeared to rise from receding flood waters many thousands of years ago. Other scenic views include those of the Beaufort Mountain range to the West and the Coastal Mountain range to the East. While driving around, it is hard to miss the great views of the ocean water filling the Comox Bay and the connected Puntledge River. Courtenay is home to the annual Vancouver Island Music Festival, the annual Comox Valley Exhibition (agricultural fair), and the Comox Valley Classic Cruisers Car Club.

The City of Courtenay is located about mid way up Vancouver Island as shown on this map. We are about a one hour and 15 minute drive from the ferry at Departure Bay in Nanaimo.

In 1848, the Courtenay River was named after Captain Courtenay of the HMCS Constance that used Augusta Bay and Goose Spit for gunnery practice. The first settlers arrived into the area in 1862. Some staked claims in the area of Comox while others staked them on the prairie along the Courtenay River. Settlers moved into the area and began clearing the land for farms, fishing local salt and fresh water fisheries, and they began logging the extensive forests.

The Pidcock family built the Comox Sawmill on the Courtenay River in the 1870s. In 1874, the first bridge was built over the Courtenay River and in 1875, a survey was completed for a connecting road from Courtenay over Comox hill to the wharf. This new bridge provided access to the lumber mill that was built on the west side of the Courtenay River in 1865. The lumber industry continued to grow and supply the coal mines in nearby areas and the growing communities of Comox and Courtenay. The development of “New Courtenay” on the West side of the river was driven by Joseph McPhee who purchased part of the land owned there by Mr. Pidcock in order to lay out a town site. This led to the creation of the downtown shopping district and the creation of the Orchard subdivisions paved the way for a large influx of population. The first newspaper was started in Courtenay and it was called the Comox News by an American named Whitney. The Comox Co-operative Creamery was established in 1901 and the first telephones were brought to the area in 1905 by Joseph McPhee to his store on 5th Street in Courtenay.

While access to this area was by sea, this started to change in 1910 when a connecting road was built from the south and four years later the E&N railway was pushed into the area from Victoria. By 1912, the town was growing rapidly as many people were coming to Vancouver Island decided to settle in Courtenay. The population grew to 600 by 1914. The town became a city in 1915 coincident with the arrival of electricity to the area. A small group of landowners feared that the power company would take over utilities so they incorporated a one square mile area as a city. A year later a massive fire destroyed much of its main street. This fire was followed by a second one in 1919. The first steel bridge was constructed over the Courtenay River in 1923. In 1926, another fire destroyed four buildings including the Riverside Hotel which had become a landmark at the time.

“C” Company of the Canadian Scottish Regiment was established in Courtenay in 1931. The Comox District Agricultural Hall was first used as their drill hall following in 1934 by the use of part of the Native Sons Hall in Courtenay. The Regiment grew rapidly after the start of the Second World War and it moved to Debert NS in 1941 and onward into service in Europe in 1942. The Canadian Government purchased a 165 acre farm from Sam Piercy in 1941 and it established Sandwick Army Camp which is now the site of Georges P Vanier Secondary School. This site was also home to the Combined Operations School which opened in 1942 under Pacific Command. Royal Canadian Navy personnel barracks were in Lewis Park. This school trained more than 25,000 troops for the war. The population of the city had grown to 1737 by 1941. Following the war, Courtenay continued to grow. School District #71 was organized in 1946 in order to deal with overcrowding. By 1951 the population of the city had grown to 2553 by 1951. Ten years later the population had increased to 3845. During this decade of growth and change the modern city emerged. The first set of apartments were built in 1956, concrete sidewalks were installed in 1962 and a sewer system was installed near the site of the air park. In 1965 a public health centre was opened and the regional district was started. By 1971 the population had increased to 7152.

Courtenay changed significantly with the construction of the Driftwood Mall in 1975 and the opening of the 17th Street Bridge. This second bridge led to the development of businesses along Cliffe Avenue to the south. A sewage treatment plant built in 1984 replaced the sewage lagoon. By 1991 the population was recorded at 11,698. Further development included the opening of a new City Hall i 1996 (the current location), an aquatic centre was built near North Island College in 1999, a new library was built in its current location in 2001. At that time the population had grown to 18,304.

Field Sawmill closed in 2004 and it was demolished in 2006. Cosco opened in 2010 and E&N rail service was suspended in 2011. The first phase of the Crown Isle shopping centre started in 2013 and the ground breaking for the new hospital occurred in 2014. By 2016 there were 25,599 people recorded as living in Courtenay according to the official 2016 Census and 12,013 private dwellings in the City.

Courtenay’s original main street is 5th street but Cliffe Avenue has become, for all practical purposes, the new main street. Here you will find a number of quaint family owned shops as well as the big box store chains and just about everything in between. Most amenities in the local area can be accessed in 10-15 minutes or less from the downtown core. Courtenay is all about choice. Take, for example, the fact that we have more than 100 eating and drinking establishments and businesses within or close to the city. Add the social and cultural options, the recreational opportunities, the clubs, specialty businesses and the volunteer organizations and you can be kept busy for most of the year if you want to. Or, simply take in the fabulous scenic beauty of the surrounding mountains, ocean, and nearby rainforest and parks and enjoy the slower pace of island life. Cliffe Avenue runs roughly north – south through the main business part of Courtenay for about 3 km. There are numerous small shopping plazas, restaurants, and other businesses with direct access to the new main street. Our New Hospital under Construction

The hew hospital located at 235 Lerwick Road in Courtenay is expected to open its doors in 2017. This 153 bed, 428,400 square foot hospital will provide the City with a state of the art facility and it cost in excess of $330 million to build. The Comox Valley Aquatic Centre located at 377 Lerwick Road offers an 8-lane, 25 metre pool, leisure pool with waves with a tot area and 2 water slides along with a hot tub, sauna, steam room and fitness studio. This 18-hole golf course is the only Platinum-rated course in the area. You will see golfers on the course nearly year round during most average weather years. Some of our Big Brand Stores

Courtenay offers most of the big brand stores for your shopping convenience such as Walmart, Home Depot, Costco, Best Buy, Canadian Tire, Superstore and Staples as well as a number of grocery stores that include Quality Foods and Thrifty Foods. The Crown Isle plaza is the newest shopping mall complex built in the suburban part area of Courtenay East. It is conveniently located next to Crown Isle and across from the newest Tim Hortons as well as Costco and Home Depot Our Driftwood Mall on Cliffe Avenue

The Driftwood Mall is located at 275 Cliffe Avenue in downtown Courtenay. It offers more that 30 stores inside and it is buttressed by Canadian Tire and Quality Foods at either end. One of our Many Strip Malls on Cliffe Avenue The City Hall is located at 830 Cliffe Avenue.